The names of the Indian merchants which appear in French partnership lists were all those of merchants who supplied the Company with its textiles and were therefore susceptible to pressure or cajolery placed on them by the Company to invest in French voyages. The most important single Indian partner at Pondicherry was a merchant known to the French as 'Soucourama' who Indrani Ray "was inclined to identify" with Sunka Ventakachalem or Sunku Muthurama Chetty, Chief Merchant of Madras from 1711 to 1730.

Sunku Muthurama was the head of a family of Komatty merchants who was said to have been involved in the civil war at the time of Aurangzeb's death and who attached himself to the Mughals at Arcot. 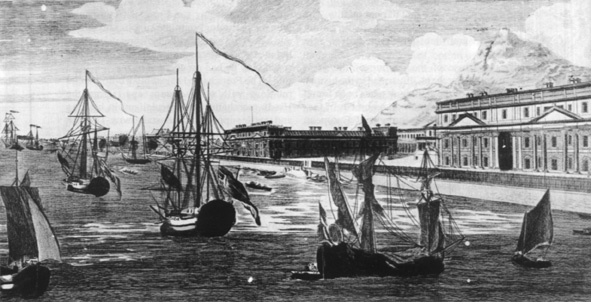 During the early 1720's Sunku Rama supplied the French Company with about half of its annual demand of textiles for Europe, as well as acting as money changer and investing in country voyages. The annual ship to Manila was named the Soucourama after him and a desire to allow him a profit and to encourage further investment involved the Superior council in some fraudulent accounting with the exchange rate of the Chinese tael on the accounts of the St Joseph to Canton in 1725 which earned them the reproaches of Paris.

After the death of Sunku Muthurama Chetty in 1734, members of his family, led by one who was possibly his brother, Seshachala, with his brothers Adiappa and Lakshmipati and Seshachala's son, Vengata Narayan, reforged their connection with the French. For the next nine years Seshachala made at least one contract a year with the Company; in 1736 he was made Merchant of the Mint, and he invested once again in French overseas trade. The family appears to have abandoned Madras for Pondicherry where Sunku Rama II was a personality of some importance. However, the family's financial position did not improve significantly. In 1737 the Superior Council noted that Sunku Rama was producing very little merchandise and that of poor quality. The drought of the late 1730's forced the family ever deeper into debt and its activities were curtailed.

The cause of the decline of the great Coromandel merchant, illustrated in the history of the family of the Sunkuvars, has been found by Professor Arasaratnam in a number of factors connected with the growth of European dominance. Indian merchants were obliged to buy European broadcloth, which was an invariable loss maker in south India, as part of the agreement to supply the companies with textiles. Indian merchants were hindered in their professional lives by the corruption of the European enclaves, particularly legal corruption, which allowed the Europeans within their own jurisdictions to disfavour Indian competition. Arasaratnam has argued that Indian merchants who, like Sunku Rama, associated with Europeans were effectively sucked dry until they lost all independence, while merchants who were not over-committed to the Europeans and who had a wider range of business activities were able to survive better.

However, Sunku Rama's interests extended well outside the European enclaves. His losses came not only from his dealing in European broadcloth but from his textile supply and his Arcot businesses as well. Nevertheless, the French experience with their merchants and with Sunku Rama shows only too well the difficulties described by Arasaratnam: the lack of wealthy independent local merchants, the reliance of the joint stock company on French advances rather than on a common capital, the delays in supply of textiles, the shortages and the price rises. In the straitened trading world of the mid-eighteenth century the European companies and the European private traders with the organizational framework of the companies to support their trade were better able to survive by shifting costs onto the parent body than the less protected Indian merchants. The latter recognized the shelter offered in this difficult climate by the European companies with their seemingly endless supplies of bullion and a demand capable of absorbing price rises, but the shelter was under European control and could only be had on unequal terms.

The French tried to establish commercial relations with other groups apart from the Hindu merchants who specialized in broking and textile supply to the coastal towns. The first of these was the Muslim trading community of the Marakkayar, who were part of the Chulia group of Muslims whose ancestors were Arab settlers of the ninth and tenth centuries, who had intermarried with the local population. They were Tamil-speaking and many of their religious traditions were syncretic: they shared many of their holy places on Coromandel with Hindus and Christians. They specialized in foreign trade to south-east Asia and around the Indian coast and were the wealthiest of the Chulias; others, Labbais, Rawthers and Kayalas were brokers, retailers and peddlars.Chulias formed an effective trading network that needed no European contacts, though they traditionally had good relations with the ruling elites and courts in many of the port cities of Ceylon and the south-east Asian archipelago where they had traded for centuries. Evidence of Marakkayar shyness of European dominance can be observed in French records. Land in Pondicherry was allocated to Marakkayar traders to encourage them to build houses and warehouses in the town, but after a number of years the empty plots showed that Chulias preferred to remain at Porto Novo. The French may have hoped to share in Marakkayar trade to south-east Asia in the same way that they had shared Isaac Elias's trade, by investing in Chulia ships and finally coming to dominate the management of the voyages. In this they were disappointed, for there is no record of Chulia partnership or shared ownership of vessels. Nevertheless, the trading links between Pondicherry and Porto Novo were strong, for the Chulias would trade with Europeans on their own terms and Pondicherry was dependent on Porto Novo both as a source of textiles and of commercial services such as money changing and broking. The Marakkayars loaded freight on French country ships and Pondicherry freight lists almost always named several 'Marcay' or 'Marcayer' of Porto Novo, but this was the limit of their involvement with the French.

The second group with whom the French built up contacts was the Muslim notables of South Arcot, who can be traced both investing in French ships and loading cargo as freight. It was this group that was in the long run to prove most influential on the French. Their contacts began with Imam Sahib, the Faujdar of Alambaram, whom the French believed had "de très bonne volonté pour la nation". Imam Sahib was an Mughal official with close attachment to the Navait family which had established a hold on the post of Nawab of Arcot from c.1710 when Sadatullah Khan was appointed. He may have been instrumental in introducing the French to the favour of Chanda Sahib, son-in-law of Nawab Dost Ali Khan. These great Mughal officials did not direct their trade exclusively through the French port and their visits of ceremony to Pondicherry were matched by similar contacts with Madras. However their importance to the English, with their extensive private trade and well-established links with other trading communities, was of less significance than to the French. When in 1741 the French Company withdrew from Asian trade and in 1744 French commerce effectively ceased with the declaration of war with Britain, inland contacts with Mughal notables became the only source of profit for the French. The Muslim regional rulers, who were gradually making themselves independent of Delhi needed to tighten their hold on their provinces to control the local gentry and to supervise collection of land revenue and for these purposes military rather than commercial help was needed which the French were ready to supply.

The relationships that the French Company and private traders established during their first thirty years of country trade were clearly crucially influential to both the nature and development of their commerce. French policy was to infiltrate and take over existing networks where they could and this proved successful with those Christian groups which did not have the structure and prohibitions of a national company to protect them. The appeal of the French was to groups or individuals already weakened by the difficult economic circumstances on Coromandel in the early eighteenth century; these were rapidly absorbed by the French. Those groups, European or Indian, which were better able to survive alone by their formal organizational structures or by their informal self-reliance resisted French attempts to ally with them. Lacking strong local contacts, the French depended heavily on capital from France and on Company pany support; when these were withdrawn in the early 1740's French country trade was seriously undermined and the French were prepared to turn inland from trade to war at the end of the 1740' s. The explanation of the failure of the French Company lies in a number of small factors that consistently disadvantaged Pondicherry in comparison with neighbouring English, Dutch and Indian ports. The local networks of the English and Dutch had been established in the previous century when the Asian maritime economy was, in general, expanding. The strengths of Madras, San Thomé and Porto Novo were a challenge that Pondicherry could not meet, handicapped as it was by a reputation for poor credit and religious intolerance dating from the previous century. The merchants of south India were in a weaker position than they had been a century earlier. Some groups turned to Europeans for help, but their weakness could only strengthen those already in a position to profit by it; others drew back from European involvement. Ultimately the importance of relationships with Indian society for the French is shown in their responsiveness to Indian needs, or at least those of the Mughal inheritors of power in south India who no longer required commercial outlets but military protection.